The 2011 Kia Soul is both cute and practical

The Kia Soul was introduced to the North American market in 2010.

Based on the Rio platform, it was one of the new breed of stubby compact urban crossover wagons, such as the Nissan Cube, Scion xB, Honda Element, Ford Flex and so on. When it hit the market, Kia was also targeting the Dodge Caliber and Suzuki SX4 as rivals. You could also toss the Pontiac Vibe and Toyota Matrix in there.

In 2011, two engines were offered, both four-cylinder. The 1.6-litre version developed 122 horsepower, while the 2.0-litre was good for 142 horses. You could choose from a four-speed automatic or five-speed manual transmission, but the manual gearbox came standard with the smaller engine.

High on the cuteness scale, the Soul did have a practical side. Fold down the back seats and you got 546 litres of cargo space and there was an abundance of rear legroom and headroom throughout the vehicle. Backseat elbow room and ingress/egress was surprisingly ample, which isn’t always the case with these kinds of puddle-jumpers.

Both on the highway and around town, the Soul surprised with its reserve power, nimbleness and, in particular, its lack of rattles, looseness or mysterious noises. Kia has kind of a checkered history when it comes to things like assembly quality but the Soul seemed to be as tight as a drum.

But it did feature an overly stiff ride.

Four versions were offered: 2u, 4u, 4u Retro and 4u Burner. Depending upon the model, you could order things like larger wheels and tires, sportier suspension, upgraded stereo, sunroof, different-coloured interior trim, air conditioning and stereo speakers with a mood lamp feature. Crank up the tunes and they glow red in time to the music – what Kia called a “club effect.” You could also choose upholstery that glows in the dark. 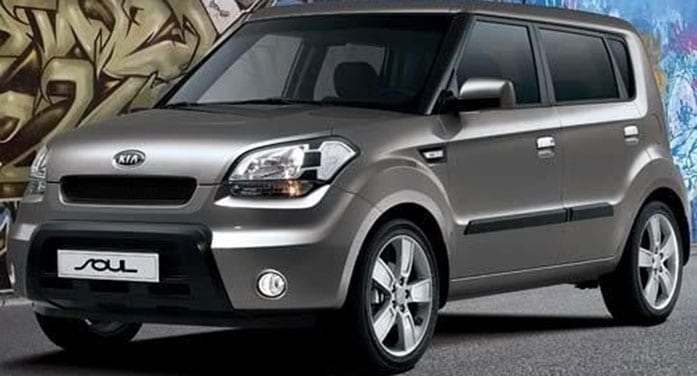 High on the cuteness scale, the Soul did have a practical side. Kia has kind of a checkered history when it comes to things like assembly quality but the Soul seemed to be as tight as a drum

Standard equipment included the usual roster of modern conveniences, such as power door locks, heated mirrors, Bluetooth capability, USB ports and heated front seats. This last feature was – and is – an excellent idea and should be standard on all cars sold in Canada.

There was one safety recall to report from Transport Canada and it concerned the sound system. Apparently, the wiring harness may contain faulty soldering that could cause the illuminated speaker system to short out and, in a worst case scenario, cause a fire. This glitch could also apply to Kia Sorento models of the same year.

The National Highway Traffic Safety Administration in the U.S., meanwhile, had eight technical service bulletins. These included issues with the fuel filler cap, a squeaky rear window washer, difficulties getting into first gear with the manual transmission, issues with the variable valve timing system and various minor electrical gremlins.

Consumer Reports was cautiously positive. They liked its affordability and “decent” performance, but had reservations about the stiff ride and “basic” interior. Some comments from owners:

Marketing researcher J.D. Power was mostly positive – but not completely. They liked the Soul’s body and interior quality, and features and instrumentation, but had misgivings about the powertrain quality and overall performance. It got a “better than most” rating for overall performance and design, and an “about average” grade for predicted reliability.

When is the right time to mow hay fields to protect birds?

How to cope when your life has been turned upside down