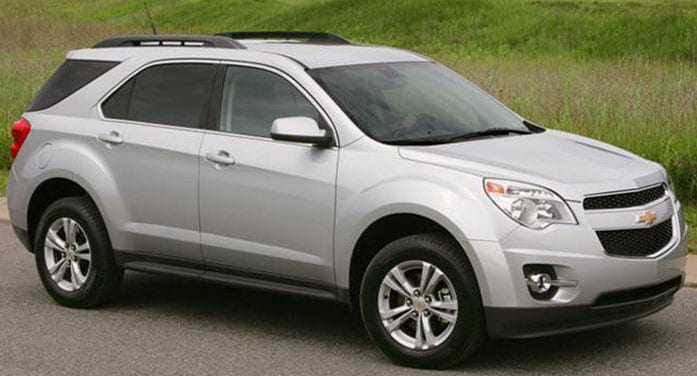 With some 1,803 litres of cargo capacity available with all the seats folded, the Equinox had less storage room than some of its competitors

The Chevrolet Equinox was the first model out of the gate after General Motors’ corporate shuffle in 2009. Made in Ingersoll, Ont., it replaced the Suzuki-built Tracker and was essentially a carryover for GM in 2011.

It could be had with two engine choices: GM’s ubiquitous 2.4-litre Ecotec four-cylinder or a 3.0-litre V6. A six-speed automatic was the only transmission choice. You could order this iteration of the Equinox with either front-wheel or all-wheel drive.

The four-cylinder engine was good for a purported 182 horses, while the V6 developed 264 horsepower. The Ecotec engine delivered slightly better fuel economy than rivals such as the Honda CR-V and Toyota RAV4. It was considerably less refined than those two, however.

With some 1,803 litres of cargo capacity available with all the seats folded, the Equinox had less storage room than either the RAV4 or the CR-V. It also featured a smaller rear door opening and a front seating position completely different than that of the Honda or Toyota.

On the other hand, it was quieter in operation than either of those two, and assembly quality seemed to be head and shoulders above what it used to be, especially the V6 version.

In terms of standard equipment, this edition of the Equinox had the usual modern conveniences, including tilt/telescoping steering, express down power front windows, cruise control, air conditioning and five cup-holders. Other standard features included an engine block heater, traction control and four-wheel anti-lock disc brakes. For RV owners who like to take a car with them, this version of the Equinox could be towed with all four wheels on the ground. Other extras included a “cargo management” package, and XM satellite radio.

Transport Canada and the U.S. National Highway Traffic Safety Administration (NHTSA) had one safety recall for the 2011 Equinox. It concerned the front seatbelts, which may come apart during an accident and cause injury to the vehicle occupants. With a simple fix, dealers will modify the buckle assembly.

NHTSA also had some 64 technical service bulletins on file for this one. These ran the gamut, from “popping” and “rattling” sounds that emanate from the fuel tank after cold starts, to a broken floor map retainer, to wiring issues with the traction control system, to “unwanted and erratic” changes in the heat and ventilation temperature. The number of bulletins is definitely on the high side.

NHTSA also had a whopping 101 complaints registered against this year of the Equinox and they covered just about everything. Examples:

By far the largest number of complaints concern the engine.

Consumer Reports gave the V6 version of the 2011 Equinox an “average” used car prediction, while the four-cylinder models are worse than average, possibly because the Ecotec engine is less refined than the V6, with considerably less power.

Marketing researcher J.D. Power classed the Equinox as “better than most” for overall performance and design and predicted reliability, but “about average” for overall quality.

The miraculous recovery of Boris Johnson

Loss of international students a blow to Canadian schools

The crude story behind the Russia/Saudi oil war