Essentially unchanged from 2010 to 2011, this generation of the Volkswagen Golf GTI actually debuted in the fall of 2006.

Power was ably provided by a turbocharged 2.0-litre four-cylinder engine that developed 200 horsepower and 207 foot-pounds of torque. Premium gas was required.

Transmission choices were either a six-speed manual or a six-speed automatic with a DSG/Tiptronic manual shift mode that had steering wheel-mounted paddles.

You could also choose from a two- or four-door version by this stage of the game.

One thing that remained intact was the GTI’s exceptional handling and braking, thanks in large measure to a stiffened and upgraded suspension setup and oversized disc brake front and back. Among other things, it featured anti-roll bars on both ends, plus a traction control system, anti-locking brakes and a stability control system.

This content is for members only. 721 words
Reading Time: 4 minutes

Few of its competitors could keep up when things got interesting and the GTI was more than enough for most drivers.

It also had a priceless exhaust note: with every shift of the transmission, the turbocharger wastegate closes briefly and it sounds like a muffled Formula One racer – music to the ears of any self-respecting gearhead. 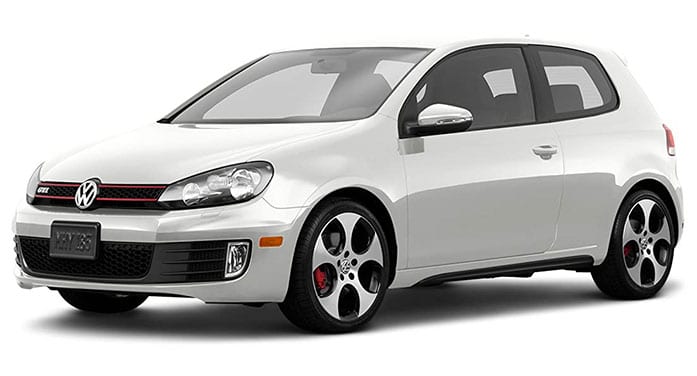 One thing that remained intact between the 2010 to 2011 models was the GTI’s exceptional handling and braking, thanks in large measure to a stiffened and upgraded suspension setup

Standard equipment also included very cool Jackie Stewart-inspired “Jacky” cloth insert bucket seats. The four-door GTI accommodated five adults, but those in the back were up close and personal, with little elbow room.

A 60/40 folding back seat revealed 413 litres of cargo space, which was enough to handle modest amounts of gear. But most GTI buyers weren’t particularly concerned about its carrying capacity.

There’s one safety recall on file with Transport Canada and it concerned the DSG automatic transmission for the 2010 model. Apparently, it could transmit a faulty high temperature reading and cause the transmission to shift abruptly into neutral. A possibly incorrectly crimped wire is the culprit.

The National Highway Traffic Safety Administration (NHTSA) in the U.S., meanwhile, had 15 technical service bulletins. These included possible issues with the steering rack, rough-running engines, the airbag warning light coming on at random and a possibly slipping timing chain. Some complaints from owners:

The last complaint is by far the most common malfunction registered with NHTSA.

Consumer Reports was a fan but had reservations. Noting that the GTI “excels at combining everyday practicality with being fun-to-drive,” it nonetheless gave it a “worse than average” used car prediction. Areas of concern included the fuel system, squeaks and rattles, and the audio system.

The 2011 edition seemed to fare better than the 2010 one despite being virtually the same car. Some comments from owners reported by Consumer Reports:

Marketing researcher J.D. Power had mixed feelings. They loved the GTI’s performance, giving the 2011 edition top marks for overall performance and design, but were less than enthusiastic about its overall quality and predicted reliability. It got a fail in the last category.

Making work fun is not a frivolous pursuit

Singh threatens to pull the plug on Liberal-NDP coalition