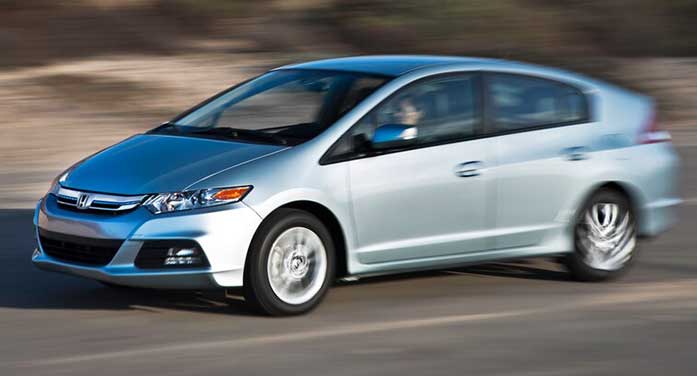 Most modern conveniences are standard with the LX model, and the EX features extras such as a navigation system, steering wheel-located paddle shifters, Bluetooth capability, steering wheel-mounted audio controls and lightweight alloy wheels

The 2012 Honda Insight was aimed squarely at first-timers and buyers under 35, since when new it was priced below the Civic Hybrid and popular Toyota Prius.

With technology fundamentally similar to that found in the current Civic Hybrid, the 2012 Insight yields fuel consumption of 4.8 litres/100 km in town and a miserly 4.5 litres/100 km on the highway. These are better numbers than the Prius and only marginally inferior to those delivered by the first-generation Insight.

Like the Civic and its predecessor, the 2012 Insight features a compact electric motor sandwiched between its internal combustion engine and a gearless continuously variable transmission (CVT). The engine displaces 1.3 litres, and the electric motor develops 10 kilowatts. Together they generate 98 horsepower and 123-foot pounds of torque.

The engine also features Honda’s i-VTEC variable valve technology, drive-by-wire throttle, and is virtually identical to that found in the Civic Hybrid, if a smidgeon less powerful. It was purpose-built just for hybrid drivetrains and is what Honda called a “low friction” powerplant. Total output for the nickel metal hydride battery pack is 128 volts, and Honda claimed it would last for 15 years or 240,000 km, whichever came first.

Behind the wheel, instrumentation consists of a two-tier instrument panel and multi-information display. An eye-shaped nacelle above the tachometer and IMA readout displays vehicle speed with a tri-colour background that shows you at a glance if you’re driving sensibly and gleaning maximum mileage from the drivetrain. Top fuel economy gives the display a green background, while “somewhat less than efficient” shows light blue and inefficient driving behaviour shows dark blue.

Like all good hybrid vehicles, this Insight has regenerative braking that harvests electrical power during deceleration.

But that’s not all. An Econ switch on the dash allows you to choose driving modes, and the multi-information display has a cute little tree graphic that scores your driving performance.

The economy mode harmonizes the engine, electric motor and transmission, reduces the time the air conditioner operates and controls the idle time of the engine when the car stops.

To wring optimum fuel economy out of the system, the driver needs to be in green mode, with all the leaves of the tree in place. The system is designed to allow drivers to closely monitor their performance. According to Honda, the whole idea is to encourage drivers to take an interest in developing fuel-efficient driving habits over the long term.

This edition of the Insight has two trim levels: LX and EX. Most of the usual modern conveniences – power windows, etc. – are standard with the LX, while the EX features extras such as a navigation system, steering wheel-located paddle shifters, Bluetooth capability, steering wheel-mounted audio controls and lightweight alloy wheels.

The U.S.-based National Highway Traffic Safety Administration (NHTSA) had eight technical service bulletins on file for this one. These included loose roof mouldings, taillight lenses fogging up, and a massive airbag recall that affected a wide range of Honda products.

Consumer Reports was guarded in its praise of the second-generation Insight. While giving it a “better than average” used car prediction, it felt that both the Honda Civic Hybrid and Toyota Prius were superior in terms of refinement. Said CR: “we found it far inferior to the Toyota Prius: noisy and stiff riding with so-so handling.”

Owners seemed to disagree, however. Some comments to CR:

Sometimes demographic ‘facts’ aren’t quite what they seem