When Ford introduced its Mustang convertible in 1964, it was powered by an optional 260-cubic-inch (4.3-litre) cast-iron V8 engine that developed just over 160 horsepower.

It was later bumped up to 289 cubic inches and more, and Ford went on to sell over a million of the first-generation Mustang in its first year of production.

Forty-seven years later, the Mustang convertible’s base engine was an all-aluminum V6 engine that had smaller displacement yet developed almost twice as much power as the original V8. In 2011, it joined a 5.0-litre V8 and a high-performance Shelby edition. Transmissions were six-speed manual or six-speed automatic.

The V6/manual gearbox combination took the 2011 Mustang convert from zero to 100 km/h in about six seconds. But buyers shouldn’t look for a manual transmission that shifts as smoothly as, say, something from Honda or Nissan; this iteration of the Mustang is still a big, rear-drive American pony car, with a comparatively heavy and stiff shift mechanism.

The convertible featured a lined top with a heated glass rear window, and it deployed in about 15 seconds. A pair of levers must be manually disengaged on the windscreen header and the power button is overhead.

Once the top is down, you understand why some folks wouldn’t be without a convertible. As well as improving all-round visibility, it gives this car a whole new dimension in driveability. Not to mention making parallel parking a whole lot easier compared to the coupe model. But rearward visibility is extremely poor when the top is up. 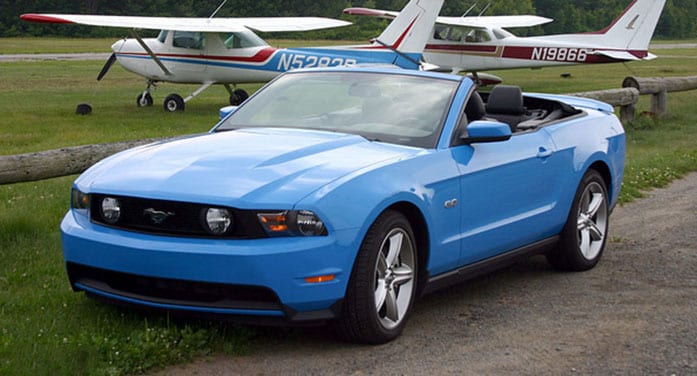 This iteration of the Mustang is still a big, rear-drive American pony car, with a comparatively heavy and stiff shift mechanism

There are no safety recalls to report from Transport Canada or the U.S. National Highway Traffic Safety Administration (NHTSA). The latter organization, however, had 22 technical service bulletins on file, including problems with unco-operative outside door handles, misfiring and rough idle issues, a range of electrical gremlins – often involving Ford’s MyTouch computer interface – and shifting difficulties in cold weather with the manual gearbox.

A sampling of complaints from owners:

These last two problem areas – the fuel injection system and transmission – seem to be the most common complaints registered with NHTSA.

Consumer Reports gave the 2011 Mustang its “Good Bet” designation, but there were some flies in the ointment. The transmissions, body hardware and climate control systems were all major problem areas. The expected reliability of this car when new was a paltry two per cent above average.

Some more comments to Consumer Reports from owners:

From a base price of around $32,000 in 2011, the Mustang convertible has dropped to the mid ’teens to low $20,000s these days, depending on the model and equipment level. The V8 versions are running about $5,000 more than the V6, and the Shelby GT500 has become something of a collectible.

Creating value for customers more important than ever

The making of an unlikely U.S. president

U.S. college basketball title game an example of sport at its best

J.F.K. dug a deep hole in his relationship with Khrushchev