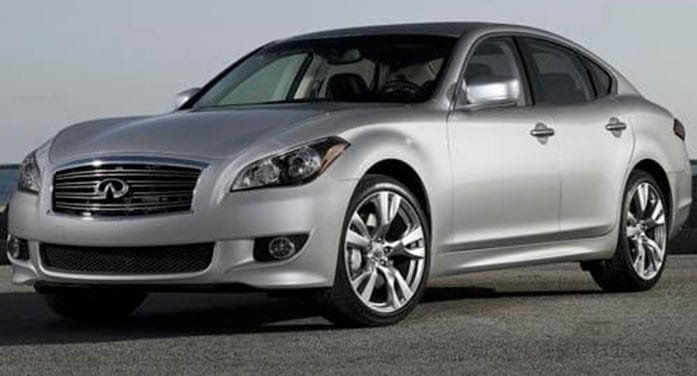 What set this breed of Infiniti apart was its “user-focused technologies” – things that pampered the driver and occupants, in other words. And this iteration of the M sedan had plenty

Restyled and re-engineered for 2011, Infiniti’s M sedan was offered as an M37 or M56, and was available with either rear-wheel or all-wheel drive.

There were two engine choices: a 3.7-litre V6 and 5.6-litre V8. The latter power plant belted out a hefty 420 horsepower, which was up 95 horsepower from the previous model and made the M56 a very quick car indeed. Nissan called it a “serious” engine. The V6, meanwhile, was good for 330 horses.

Both engines were mated to a seven-speed automatic transmission with a manual shift mode and, in the case of the M37, Nissan/Infiniti’s downshift rev-matching feature. This automatically matched engine and transmission speeds when downshifting and was also found in the 370Z Roadster.

Both rear-drive models were also available with Nissan’s four-wheel active steering feature, which angles or ‘steers’ the rear wheels up to one per cent during hard cornering. It was part of the Sport Package, which also included upgraded brakes and 20-inch wheels and tires.

IMAGE LINK, CAPTION IN DOWNLOAD DOCUMENT
Reading Time: 4 minutes
NOT YET A PREMIUM MEMBER?
You pay $21

The optional Infiniti Drive system let the driver, via a console-mounted rotary knob, choose from four performance modes, including an Eco setting, which changed the throttle pedal response and made it push back slightly when you wanted to overtake or speed up. Infiniti tagged this feature the Eco Pedal and performance was directly affected when it was in play.

The interior was also on the receiving end of a complete redesign and featured a tiered centre stack angled toward the driver, with all-new switch gear.

But arguably what set this breed of Infiniti apart was its “user-focused technologies” – things that pampered the driver and occupants, in other words. And this iteration of the M sedan had plenty.

For example, as well as providing an impressive 16-speaker aural experience, the Bose sound system helped reduce noise, vibration and harshness (NVH). If, for example, the engine was revving at 5,000 rpm in one of the lower gears, the sound system sensed this and dampened the intruding noise accordingly.

There was one safety recall to report for this vintage of the M sedan and it concerned a possible leak in the pressure sensor in the M56’s fuel delivery system. If present, it could lead to an engine fire, but was easily rectified by dealers. This glitch also applies to the 2011 Nissan Juke.

The U.S. National Highway Traffic Safety Administration (NHTSA) had 13 technical bulletins out there for the 2011 M sedan. These include issues with the intelligent key feature, sketchy power windows, “excessive engine braking” after releasing the accelerator, transmission glitches, and various electrical problems.

Some complaints registered with NHTSA:

Electrical gremlins seem to be this vehicle’s nemesis.

Marketing researcher J.D. Power wasn’t too keen on this year of the M sedan, giving it below-average grades for overall quality, performance and design, and just an average rating for predicted reliability.

Confusingly, Consumer Reports gave its Good Bet seal of approval here, but all was not sweetness and light. The Bose sound system, for example, seemed to be a steady source of headaches and blemished an otherwise above-average dependability performance. The electrical system was also a source of problems, according to CR and, consequently, the 2011 M sedan rated an average used car verdict.

Some comments to CR from owners:

Harry will receive a princely sum for a book about nothing