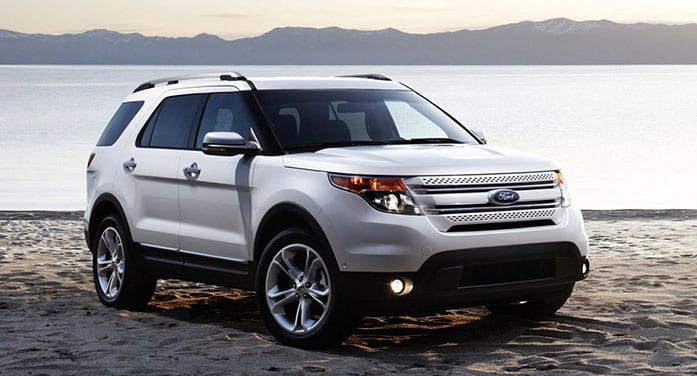 The Explorer was aimed more at soccer moms than off-road rock-hoppers, and was still the quintessential suburban grocery-getter. With seating for seven, it came with all the features you’d expect to find in a mid-size SUV

Debuting in mid-2010, the 2011 Ford Explorer signalled a new direction for Ford’s most popular SUV. From here on in, fuel economy would trump performance.

Power was delivered by either a Triton V6 that displaced 3.5 litres and developed 290 horsepower, or a 2.0-litre turbocharged Eco-Boost four-cylinder engine that came later in the model year.

There was one transmission choice: a six-speed automatic. You could choose from front-wheel or all-wheel-drive and the latter had four settings – normal, mud, snow, sand – and a hill descent control feature that works off the anti-lock brake system. All are accessed via a centre-console-mounted rotary knob.

The Explorer was aimed more at soccer moms than off-road rock-hoppers, and was still the quintessential suburban grocery-getter. With seating for seven, it came with all the features you’d expect to find in a mid-size SUV.

For example, one-touch down driver’s power window, tilt/telescoping steering, four 12-volt power points, Ford’s MyKey owner-programmable performance setting and a raft of safety features. Perhaps the most intriguing of these was a new Curve Control system that reduces vehicle speed if you find yourself entering a turn too hot. Ford explained that some 50,000 people a year were injured because of loss of control while negotiating turns and this system scrubs off speed via the brakes.

There were three trim levels: base, XLT and Limited. As you climbed up the model range, things like leather interior, backup camera, remote start, power adjustable pedals, power rear tailgate, universal garage door opener and Ford’s glitzy ambient lighting feature became available. One slick little goodie with the top-of-the-line Limited model is a power-operated third-row seat that pops up or disappears into the floor with the press of a button.

This edition of the Explorer was manufactured in Chicago and was the most electronically sophisticated version Ford ever put forward. It was loaded with in-car technology, with no less than 28 contractors supplying expertise and research and development. Microsoft, Sharp, Bluetooth, Gracenote and Sony were just a few partners that helped put together the company’s MyFord and Sync technology systems.

There were two safety recalls to report from Transport Canada. One was an “inconsequential” labelling issue, while the other concerned rear seat reclining mechanisms that may have “imperfect” components affecting the seat’s strength and safety.

At the U.S. National Highway Traffic Safety Administration (NHTSA) there were 14 technical service bulletins for the 2011 Explorer. These ranged from extended warranty issues, problems with the engine cooling fan, a problem with “sluggish” acceleration, locking/unlocking issues with the key fob and glitchy airbag software.

NHTSA also had at least 189 complaints on file. A sampling:

Problems with the power steering and the Sync system seem to be the most often-heard complaints here.

Not much love from Consumer Reports for the ’11 Explorer. Overall, it got a “much worse than average” used car prediction rating. Problem areas included the cooling system, climate control, body hardware and the audio system.

Marketing researcher J.D. Power seems to like it a little better, giving the 2011 Explorer a “better than most” grade for overall performance and design, and average marks for predicted reliability.

From a base price of about $30,000 in 2011, the Explorer is fetching anywhere from $5,000 to $10,000, depending on the model and equipment level. All-wheel-drive versions seem to fetch more than the front-drive models. The four-cylinder EcoBoost versions are valued higher than the V6.

How to handle job-interview stress