The year 2010 wasn’t the best of times for Toyota. Unintended acceleration complaints and floormat glitches were giving the company fits. No model in the company’s lineup, it seemed, was immune and Toyota appeared to spend most of its time putting out fires.

But as it turns out, this was a pretty good year for the Camry – it maintained its reputation as one of the more reliable cars on the road.

Available with a four-cylinder or V6 engine, and a hybrid version, the 2010 Camry was offered in a variety of trim levels. It was also on the receiving end of a mild restyling job this year.

Then, as now, when you purchased a Camry, you were usually getting a four-wheeled appliance that would at a minimum give you years of hassle-free motoring. Groups like Consumer Reports and J.D. Power have consistently given the Camry top marks in just about every department for years, and 2010 was no exception.

This content is for members only. 703 words
Reading Time: 4 minutes

One of the more popular models was the mid-level SE, which was powered by a 2.5-litre four-cylinder engine that developed 179 horsepower. This engine was used throughout Toyota’s lineup, in one form or another, including in the Venza and the Highlander. 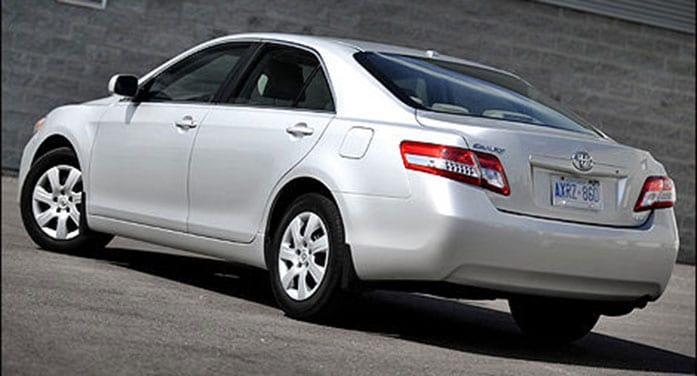 In a year when Toyota spent most of its time putting out fires, the Camry managed to maintain its reputation as one of the more reliable cars on the road

Three safety recalls were on file with Transport Canada. One involved possible issues with the left rear brake hydraulic line on four-cylinder models, while the other two concerned the floor mats and resulting accelerator pedal issues. Toyota mounted a vigorous campaign to sort all this out and these last two glitches should be history by now.

The U.S. National Highway Traffic Safety Administration had 21 technical service bulletins for this vintage of the Camry. These ranged from unco-operative sun visors, “dusty” ventilation systems, occasionally “inoperative” engine cooling fans, possible engine oil leaks with the V6 models, and sun roofs that may leak because of clogged drainage tubes.

Consumer Reports really liked the 2010 Camry. Aside from a minor glitch with the braking system, it got top marks in just about every category, garnering a “best bet” designation from this organization. This also applied to its safety rating – the 2010 Camry received top marks in front, side and offset crash tests, both from NHTSA and the Insurance Institute for Highway Safety (IIHS).

Some comments from owners:

Marketing researcher J.D. Power liked most things about the 2010 Camry, especially its overall quality and powertrain, but was less enthusiastic when it came to things like style, comfort and overall performance. Nonetheless, it gave this year a “better than most” rating for overall quality.

The 2022 Kia Carnival SX proves minivans can be cool

How to decipher those confusing hotel meal plans