In 2010, you could pick up a new Hyundai Sonata for under $18,000, making it one of the best deals going in the mid-size sedan market.

That price applied to the base GL, equipped with a four-cylinder engine and a manual transmission. But the equipment level was still pretty high, with standard features like air conditioning, power windows and heated seats.

You had two engine choices: the 2.4-litre four-cylinder or a lively V6. And there were two transmissions: five-speed manual and five-speed automatic. Available extras included a leather interior, a navigation system and satellite radio.

This content is for members only. 721 words
Reading Time: 4 minutes

The V6 developed 249 horsepower and featured Hyundai’s version of a continuously variable valve timing system. It was as good as anything else in this segment, unobtrusive and well-behaved.

The transmission utilized Hyundai’s Shiftronic manual shift feature. And the V6 delivered highway fuel economy virtually identical to that of its four-cylinder stablemate.

All things considered, the V6 was a better choice than the four-cylinder engine. But either way, Hyundai engineers emphasized comfort over handling with this generation of the Sonata. Underway, it had a kind of 1990s Buick feel to it. Don’t look for snappy handling – it isn’t that kind of car. 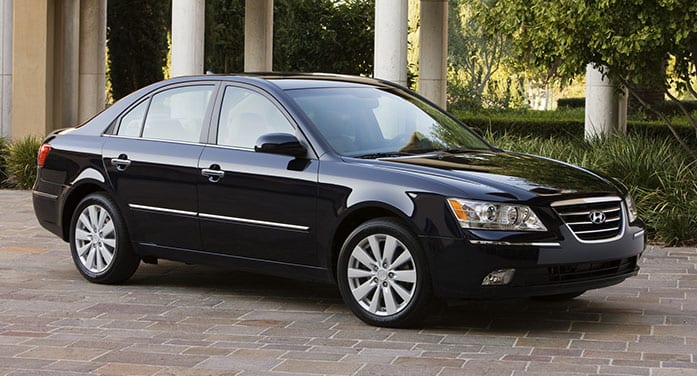 Hyundai engineers emphasized comfort over handling with this generation of the Sonata, so don’t look for snappy manoeuvrability

If this generation of the Sonata had a failing, it can be found in its interior, which had one of the least inspiring layouts in this market segment. Highway noise was another sore point. Over 80 km/h, the volume level inside the car rises. This year of Toyota Camry, for example, was quieter, as was the Chevrolet Malibu.

The Sonata offered 462 litres of trunk space, which compared favourably to the Malibu (428 litres) and the Honda Accord (338 litres). There was also a 60/40 folding rear seat, with all kinds of pass-through space. And although the interior was pretty bland, there was lots of headroom, rear legroom and more than enough elbow room for five adults.

There were virtually no differences between the 2009 and 2010 Sonatas, but a completely revamped and much more contemporary model was on the way for 2011.

There were no safety recalls for the 2010 Sonata, either from Transport Canada or the U.S. National Highway Traffic Safety Administration. But the latter organization had 13 technical service bulletins on file. These ranged from questionable oxygen sensors to issues with the front transaxle to transmission shift “quality” to a range of updates for service personnel.

Some complaints from owners included wonky exterior door handles, issues with premature brake wear, a low-beam headlight defect that “erases the field of view for objects alongside the road,” and “swimmy” steering. There are some 41 complaints in all.

Consumer Reports liked the 2010 Sonata but not overly so. They praised its four-cylinder fuel economy and V6 smoothness, and it received good marks in most areas, with the exception of the electrical system, brakes and “body hardware.” The four-cylinder models got an “average” used car verdict, while the V6 models fared better, garnering an above-average grade.

Some comments from owners:

Marketing researcher J.D. Power was a big fan and gave the 2010 Sonata one of its dependability awards. It got an “among the best” rating for overall dependability and “better than most” for predicted reliability. But it got a below-average grade for style, and just average marks for things like overall performance and design, and overall quality.

So it’s not the most exciting set of wheels out there but probably reliable.

Locking down your precious data

Sports world needs to help lead the way to equality