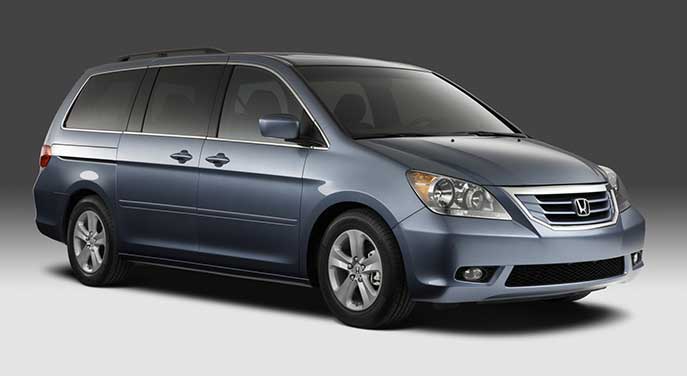 Reintroduced with sliding side doors and a new body style in 1999, Honda’s Odyssey has been a success story ever since.

Over the years, this minivan has become more powerful, with a host of upgrades and engineering goodies. But its basic dimensions have remained about the same. Why mess with success?

In 2010, it came in four trim levels, all with a powerful and silky-smooth 3.5-litre V6 engine that developed 244 horsepower. Transmission was a five-speed automatic with Honda’s Grade Logic Control system. This automatically finds the best gear combination based on driving conditions and engine speed, and Honda has been using it on various models for more than a decade.

As well as adding 34 horsepower in the intervening 11 years, the 2010 Odyssey had Honda’s Advanced Variable Cylinder management system, which shuts off up to half the cylinders during certain driving conditions. A little light on the dash lets the driver know when the system is in play and increases the Odyssey’s fuel economy in town and on the highway.

This content is for members only. 715 words
Reading Time: 4 minutes

Eight people can fit into one of these, no problem, and the second-row seats, though heavy, are all fairly straightforward to remove and reinstall. They also tilt forward for easy access to the back. The rear windows also open. And the recessed floor in the back luggage area accommodates the third-row seats, which fold into the floor.

With everything folded away or removed, there’s 4,173 litres of cargo space, with an under-floor storage area behind the front seats. The base DX version from 2010 doesn’t have power side doors, but the versions that do feature dash-mounted buttons, interior switches and/or the key fob.

This generation of the Odyssey had perhaps the worst noise, vibration and harshness of all the mini-vans on the market. Rivals such as the Hyundai Entourage and Kia Sedona, for example, were much quieter to drive. This was a pervasive problem with many Honda products at the time. A redesign for the 2011 model year meant things got better in this area.

But there are lots of things to take your mind off the road racket. The Touring model, for example, has tri-zone climate control, leather interior, power-adjustable pedals, power rear lift-gate, heated front seats, rear DVD player and a navigation system.

There are no safety recalls on this model, either from Transport Canada or the National Highway Traffic Safety Administration in the United States.

The latter organization, however, did have six technical service bulletins on file, including “clunking popping or clicking from the front of the vehicle while turning,” issues with the power steering pump, spark plug fouling and random software issues. Among the 62 complaints from owners:

Consumer Reports liked the 2010 Odyssey but not overly so. It received an “average” new car prediction from this organization, with an expected reliability of two per cent below average in 2010. Still, it got top marks virtually across the board, except for suspension issues and the ubiquitous “squeaks and rattles.” Some comments from owners:

Marketing researcher J.D. Power wasn’t too keen on this one. Despite awarding it top marks for overall performance and design, it gave it a failing grade for predicted reliability and an average mark for overall dependability. It does excel in terms of comfort and performance, according to J.D.

From a base price of just under $32,000, the Odyssey has held up reasonably well. There seems to be a large disparity between the base DX and top-of-the-range Touring models, but you can expect to pay anywhere from $13,000 to $19,000.

Onwards to St. Michael’s Mount, across fields and marsh