It’s time for some auto industry odds and ends, random notes and updates that have come my way lately.

Subaru has just announced the pricing structure for the 2022 Legacy and Outback.

Available in five trim levels, the newest Legacy continues to have a full-time all-wheel-drive system and can be had with a turbocharged 2.4-litre engine or normally-aspirated 2.5-litre four-cylinder flat-four engine.

Depending on the model, options may include a wireless phone charger, heated rear seats, heated steering wheel, upgraded stereo and navigation system. Starting at $26,795 for the Convenience model, the Legacy goes up to just under $40,000 for a Premier GT.

The Outback will be available in seven versions, featuring essentially the same drivetrain as the Legacy, with an “enhanced” all-wheel/four-wheel-drive system. The base Convenience model starts at $31,195 while the top-of-the-line Premier XT starts at $44,195.

Subaru is also set to introduce its first all-battery-powered vehicle. Named the Solterra, it will be the company’s first vehicle built on the battery electric vehicle (BEV) dedicated e-Subaru Global Platform. Co-developed with Toyota, the Solterra is scheduled to debut in Canada in the middle of 2022. 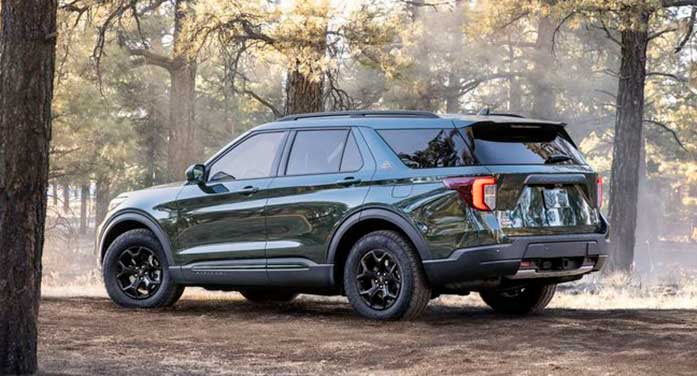 Ford will take the wraps off its all-electric F-150 next week. Known as the Lightning, the new truck will be revealed via Facebook, Twitter and other social media on May 19, from company headquarters in Dearborn, Mich.

Ford also just announced its latest addition to the Explorer SUV stable. The all-new Timberline Explorer joins the new Bronco, all-new F-150 Raptor, and the Tremor lineup of Ford trucks to be the seventh new SUV or truck Ford has introduced since 2019.

With seven drive modes, the 2021 Explorer Timberline features a 2.3-litre EcoBoost engine producing 300 horsepower and 310 pound-feet of torque, paired with a 10-speed automatic transmission. For customers who need to tow vacation trailers, ATVs and boats to their adventures, the standard Class III Trailer Tow Package brings 5,300 pounds of towing capability. It arrives at Ford dealers this summer.

Over at Honda, the all-new 2022 Civic was just revealed. Built in Alliston, Ont., the 11th generation Civic gets a complete redesign, with new powertrain components, a tweaked chassis, improved fuel economy and a restyled body.

Canadians have apparently purchased more than two million Civics since 1973, and it remains the top-selling vehicle in North America. Look for the 2022 Civic later this year.

Honda is also accelerating its electric vehicle program and is shooting for “100 per cent zero-emission electrified vehicles in North America” by 2040. Among other things, the company is experimenting with fuel cell technology, hydrogen power and solid-state batteries.

Nissan unveiled its newest version of the GT-R Nismo Special Edition recently in Japan. With 600 horsepower and some 480 foot-pounds of torque, the GT-R maintains its place as one of the world’s most underrated supercars. Racers have known about the GT-R for years and, in the right hands, it can leave Ferraris, Lamborghinis, Corvettes and Porsches for dead.

Each car has a hand-built engine, and Nissan uses lightweight carbon fibre and titanium components throughout. They won’t make that many, but some will be available to North American buyers when they announce pricing later this year. But it won’t matter what the price is – all the cars are probably spoken for already.

And still with Nissan, the all-new Infiniti QX55 and QX60 crossovers are about to hit showrooms in Canada. The former should be available as you read this, with the latter is coming sometime this fall.

Power for the QX55 is delivered by a turbocharged V6, which will be offered in three trim levels, starting at $52,000. All-wheel-drive is standard, of course, and the QX55 will come with a full complement of luxury modern conveniences, including Apple CarPlay and 20-inch wheels and tires.

Creativity in business must be tested

Your guide to unsticking your team’s potential

There is nothing scarier than our own imagination

Genesis G90: true luxury and a pleasure to drive