War, tragedy, and a Broadway hit all part of Gander’s celebrated past

This is part 26 in our series ConnecTour Chronicles 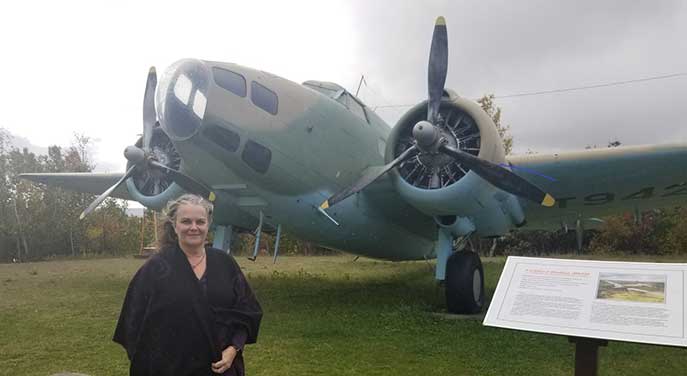 Sandra Seaward is CEO of the North American Aviation Museum in Gander, N.L. That’s a Lockheed Hudson Bomber aircraft in the background.

Although she grew up just an hour from what was once one of North America’s most important airports, Sandra Seaward says she didn’t have much of an interest in studying its past.

“I never had an affiliation for history,” she says, scrunching her face into a frown. “It had a lot to do with my history teacher in high school.”

That all changed in 2013 when she was recruited to be CEO for the North American Aviation Museum in Gander, N.L. She was hired for her administrative skills but quickly found herself immersed in the fascinating series of events that both gave this small city on the northeastern side of Newfoundland its identity and juiced its once-booming economy.

She has also had the opportunity to meet some of the unsung heroes involved in the top secret Ferry Command project that helped change the course of the Second World War. ConnecTour visited Seaward at the museum to learn how aviation has defined Gander.

Two of those unsung heroes were women – Hazel Fausak and Gloria Lindsay. Hazel, who died at age 92 in 2016, did encryption for Ferry Command and Gloria did inputting. After the war, the women were simply sent home without an honour or a pension to compensate for their contributions. It wasn’t until 2015, when the museum held a gala to celebrate the 75th anniversary of Ferry Command, that the two women were reunited and given acknowledgement for their contribution to the war effort.

Ferry Command was created in response to Britain’s desperate need for aircraft in 1940, when the Nazis’ superior air power seemed insurmountable. Seaward says ships carrying aircraft across the ocean were often sunk and – even when successful – it could take as much as three months to ship the aircraft overseas. But what if the aircraft could be flown over?

The British War Ministry decided to try ferrying the aircraft to Britain, using the Gander Airport as the jumping-off point. The first trip in November 1940 involved seven Lockheed Hudson bombers and the crew were offered the then-enormous sum of $1,000 if they arrived successfully.

“They all made it,” says Seaward, and that success “popped the cork” on Ferry Command. By the end of the war, about 10,000 aircraft had been ferried from Gander.

“It made a huge difference,” says Seaward. “It definitely changed the course of the war.”

But Gander’s aviation history predates the war. Gander was hand-picked for greatness during the nascent days of cross-Atlantic passenger air travel. British Overseas Airways Corporation was building air mail and passenger routes, and hired an aviator named Col. Doug Fraser to find an ideal location for aircraft travelling from the U.K. to refuel. He chose Gander in 1935 for its absence of fog, favourable winds and proximity to easily identifiable Gander Lake. By 1938, the world’s largest airport was in full operation.

“Then the war broke out,” says Seawater. According to apocryphal, Adolf Hitler so hated the strategic value of the airport to the Allies, he had a standing order to destroy it – “but they couldn’t find it.”

The war had a huge impact on the town, with as many as 15,000 people working at the airport.

“It wouldn’t matter who it was, they had to stop here,” says Seaward.

Keep an Eye on Newfoundland

It was also considered a neutral ground during the height of the Cold War. On New Year’s Eve in 1972, Cuba’s Fidel Castro famously borrowed a young boy’s toboggan and tried it out during a trip through the community.

But as transatlantic flights no longer needed to stop to refuel, traffic at the airport declined. By 1961, just 5,700 people lived in town, although the population has grown to nearly 12,000 today.

The first was a devastating crash of Arrow Air Flight 1285R, which was carrying U.S. troops from Cairo, Egypt, to Kentucky. On Dec. 12, 1985, the plane went down shortly after takeoff from Gander, taking the lives of all 248 passengers and eight crew members. It remains the deadliest crash in Canada’s history. Seaward’s husband, Greg Seaward, was working for the local newspaper and was the first photographer on the scene.

An investigation by the Canadian Aviation Safety Board concluded the probable cause of the crash was the aircraft’s reduced lift condition, which was likely the result of ice on the wings’ leading edges and upper surfaces. It also stated the plane’s weight was underestimated.

But a dissenting report from four of the nine investigators challenged that theory and speculated that an onboard fire of “unknown origin” was behind the crash. Seaward says many Gander residents still believe there was a coverup behind the tragedy. Several residents reported seeing flames coming from the plane while it was in the air and one resident says he heard a loud thump.

The other event was more positive and is celebrated in the hit Broadway musical Come From Away. During the Sept. 11, 2001, terrorist attacks, a number of passenger flights were diverted to Gander. Within three hours, air traffic controllers at Gander had commanded 42 aircraft to land and got them on the ground safely.

“There was not as much as a nicked wing,” says Seaward. Controllers “did an absolutely phenomenal job.”

How the town responded – with food, accommodations, gifts for 6,700 unexpected guests – is a matter of record and of national pride. Years later, Seaward was invited to Manhattan to watch the musical on Broadway, a highlight of her time at the museum.

These days, the museum is working to raise as much as $5 million to build a hangar large enough to bring their beloved Lockheed Hudson Bomber aircraft indoors, where it can be preserved. It sits outdoors and Seaward says it is slowly eroding in the elements. Only six of the aircraft exist in the world, and the one at Gander is the only one in the Americas.

It’s a machine that tells the story of the people involved in the war effort, says Seaward, who was involved in bringing the plane to the museum from a podium it sat on adjacent to the airport.

“When I saw that plane on the highway, I knew it had to come to town.”

The ConnecTour team is scheduled to reach its destination of St. John’s, N.L., on Tuesday, Oct. 12. Watch this space for updates from the road.

Will OPEC oil price hike lead to a Saudi/U.S. “divorce”

Federal government’s appetite for spending is a serious problem