Inherent Indigenous rights are not a gift from government 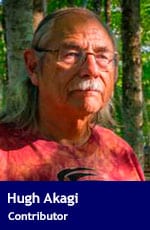 The Supreme Court of Canada has begun to repair the hundreds of years of friction between Indigenous people and European settlers. The court recently ruled that “persons who are not Canadian citizens and who do not reside in Canada can exercise an Aboriginal right.”

Many people are thinking long and hard about the implications. Imagine – rights protected by the Canadian Constitution being extended to people who have never lived in Canada.

Citizens of the Sinixt Nation were expelled from what is now British Columbia and then declared extinct by the Canadian government. But Sinixt citizen Richard Desautel, who lives in Washington State, returned to B.C. to hunt an elk. He reported his successful hunt to provincial conservation officers, was charged and won cases all through the court system. Then he won at the Supreme Court.

This case has huge implications for my fellow Peskotomuhkati (Passamaquoddy), whose territory straddles what is now the New Brunswick-Maine border.

The people thinking about this case include border guards, conservation officers, immigration officials, hunters and people who live near traditional Indigenous territory. But perhaps the implications aren’t as complex as they initially seem.

Most Canadians live within 150 km or so from the United States border. It’s no surprise that Indigenous people crossed this relatively new border for at least 14,000 years – long before Europeans arrived.

Many Canadians and Americans remember crossing the international border after answering a few questions or just waving at the border guard. Some Canadians remember being out for a Sunday drive on back roads and ending up in America without going through a border crossing. Hunters remember accidentally crossing into the U.S. and being politely turned back by U.S. officials.

Times have changed. Borders have hardened.

But if you have a constitutional right to hunt in a particular geographic spot, surely you have a right to be there. How else could you hunt?

Those rights to hunt and be in a geographic location will still be subject to administrative laws and rules. I also have a right to free expression, but I can’t demand to enter the premier’s office at any time to express myself. There will always be limits, even on inherent, historic and constitutionally guaranteed rights.

Let’s look at other practical matters.

The territories of Indigenous peoples are often bisected by the border between what’s now Canada and the United States. I can throw a softball across the Skutik (St. Croix) River to Maine – that’s how close I am to my relatives and fellow Peskotomuhkati.

Some in the nation don’t have the appropriate identification to cross – passports or Indian status cards, for example. To have an Indian status card, you must be registered as an “Indian” under Canada’s Indian Act. But the government has changed the criteria, listed and delisted thousands of Indians over many decades. Imagine the U.S. or United Nations coming into Canada and telling you that you aren’t actually Canadian but your neighbour is.

My nation, the Peskotomuhkati, intervened in the Supreme Court case because we knew how important the issues were to all Indigenous peoples across North America.

Peskotomuhkati who live in the part of our homeland that is now in the United States are federally recognized and have been for more than 45 years. Nation citizens in Canada have been promised recognition as “Indians” for 15 years but this hasn’t come to pass. This recognition is a legal definition subject to the Indian Act – a law passed by the Canadian Parliament in 1876.

But these terms aren’t our terms, norms or governmental systems. They’ve been imposed on us by European settlers. For about 14,000 years before European settlement, we travelled to hunt, fish, for seasonal settlements and to visit relatives. That travelling was often through other nation’s territories. We respected other Indigenous territory, but there were no states, provinces or countries as we now know them. States, provinces and the international border are quite recent developments for us. Even our recent formal and treaty relationship began long before there was a Canada or U.S.

So is it fair, just, lawful or even logical to separate members of a nation by this new international border?

The Supreme Court says the obvious: No, it isn’t.

The Peskotomuhkati are one united nation and now the Supreme Court agrees. We’re negotiating with New Brunswick and Canada and expect those governments to respect our rights and our abilities to manage the implications of this new Supreme Court ruling.

I’m a hopeful person. In many ways, I have to be hopeful and patient while waiting for the recognition and respect we deserve, based on inherent rights. But I still worry that 20 years from now my nation’s young people will be asking what went wrong and how yet another Supreme Court ruling got ignored or watered down.

A Supreme Court ruling can be one step forward. But it’s a long journey and the elected governments, senior civil servants and what’s called the administrative state can help, delay or hinder. By administrative state I mean the mid-level and local officials who interpret and implement laws.

I always cite the Marshall decision. In 1999, Mi’kmaq fisher Donald Marshall Jr. won his case at the Supreme Court, which ruled that Indigenous people have a right to a moderate livelihood commercial fishery.

Still, in the 22 years since the decision, there’s been no agreement on what those words mean. Even the courts have subsequently ruled that Canada’s Department of Fisheries and Oceans is wrong to squeeze Indigenous fishing rights into commercial fishing practices. That means pressure on Indigenous people to buy used boats and fishing licences from white fishers. The boats are often old, driven by polluting engines, and the nets and other equipment are not environmentally friendly.

This impediment to exercising a constitutionally protected and inherent right is improper. Imagine having to obtain a government licence to begin exercising your constitutional right to free expression. I hope administrative state officials aren’t trying to figure out impediments to our exercising rights affirmed in this new ruling.

As a Sakom and head of a nation, I’m naturally asked questions by citizens on both sides of the international border. They want answers to some important questions. It’s likely that Peskotomuhkati residing in Maine now have recognition to exercise their Indigenous rights as protected by the Constitution in Canada. But border officials will still be there to ask their questions, as they do with all travellers.

A legitimate answer should now be that the Peskotomuhkati visitor is coming up to exercise constitutionally protected rights. Peskotomuhkati citizens moving to Canada will be entitled to access to health care – just as I or any other of our citizens now living in Canada are guaranteed the same by U.S. laws if we decide to live in the U.S.

Someone in the administrative state will now be thinking about whether Indigenous people need a passport, Indian status card or other documentation to cross. They’ll also be thinking about whether Indigenous people now living in the U.S. will have to go through the same immigration process as people who don’t have constitutionally protected rights in Canada.

These questions will keep lawyers busy. But in the end, Indigenous rights must be properly accessed and administered through Peskotomuhkati rules and regulations requiring fair and equal negotiations with federal and provincial government officials in Canada. These negotiations must be on a nation-to-nation basis with the representations of the greater nation on both sides of the border.

We’ve been managing the environment with Peskotomuhkati laws, policies and regulations for 14,000 years, and we will continue to work to ensure that food sources are respected and sustainable. We’ve recently negotiated a successful moose hunting agreement with New Brunswick that applies to Peskotomuhkati on both sides of the international border. We can do the same with other food sources and natural resources.

We didn’t just receive rights or new rights from the court. The government didn’t give us these rights. These rights are inherent, historical, and part of our long treaty relationship with European Nations and governments.

No one’s rights are a gift from government. All people have inherent, natural rights. The government’s job is to protect rights, not give some out as gifts and take others away. All the Supreme Court has just done is recognize my nation’s natural Indigenous rights – and rightly so.

Chief Hugh Akagi was born and raised in the traditional territory of his people, the Peskotomuhkati, in which he has humbly held the role of Chief since 1998. Chief Akagi’s career spans more than three decades of completing scientific research for the Department of Fisheries and Oceans while working closely with other scientific institutions worldwide. Combining the traditional knowledge of his people with the scientific knowledge of his career, he is a highly sought-after keynote speaker for universities, high schools, government institutions, as well as many films and documentaries.

Governor general: an anachronism who can save democracy