This is part 5 in our series ConnecTour Chronicles

Doug Firby, publisher of Troy Media, is part of a group of Canadians who call themselves ConnecTour. Starting on May 28 in Kelowna, B.C. (B.C. travel restrictions derailed a planned start in Victoria), they hope to make an 8,000-km bicycle journey across the country, discovering how the COVID-19 pandemic has reshaped our lives and our sense of community. Watch for his reports on Troy Media. More information on the tour is available at ConnecTour.ca.

MOYIE, B.C. – Sherry Parsons lives in a home full of ghosts in an out-of-the-way former mining town in British Columbia’s East Kootenay region. And she’s okay with that.

Parsons, 74, and her husband, Michael, built a house next to the historic St. Peter’s Catholic Church in Moyie, B.C., after struggling for years to gain title. Finally, through a twist of travel fate, the ConnecTour group has landed at her yard looking for a place to stay.

Gaining title to the property wasn’t easy – the former Fort McMurray, Alta., resident eventually found the owner, Mary, the madam at a brothel that operated on the site in the 1960s. Parsons chased her down at a bar in nearby Yahk and convinced her to sign over the title to the land in about 1985.

This is part 5 in our series ConnecTour Chronicles

The land was the site of a Catholic church in Moyie and then was a home of, as Parsons says, “ill repute” during Moyie’s brief heyday of mining galena, a source of silver. 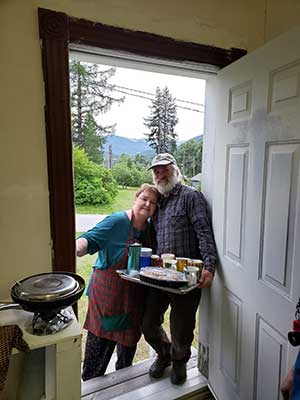 As was common in historic Western Canadian mining towns, the rough-cut dreams of hard-drinking, get-rich-quick prospectors came up hard against the brutal reality of the ‘service industry’ – young women pressed into prostitution at the behest of a merciless madam, who operated more like a slave-master.

The brothel in question, however, came much later – Parsons said a man named Gus Rudd won the building in a poker game about 60 years ago and decided to turn it into a brothel. The madam also had some backup muscle, a big strapping man known as Bubba, who would be turned loose on the girls when they got out of line.

The women were angry and fearful of the enforcer and the beatings that came their way if they got on the wrong side of Bubba.

Parsons believes the ghosts of those women have never left the place where they were forced to ply their trade. After Parsons and her husband built their home and moved in around 2005, they noticed something odd in their home – a presence that would set the pets howling in fear.

“It’s haunted, definitely,” said Parson. “From the ladies of the evening. The church was dismantled years ago, and they put in a little brown shack.”

It didn’t take long to discover the ghosts in their home.

“The first clue was little wisps of smoke but it wasn’t smoke,” said Parson. “It was a fog. And the animals immediately alerted us to it.

“And I knew, because of the history, and having a bullying madam, a mean bitch. And she said to me, ‘The only time I’d sic Bubba on the girls was when they fought over jewelry or those boa feathers. Other than that, if they plied their trade in the way they knew how I didn’t have to send Bubba to beat them up.’” 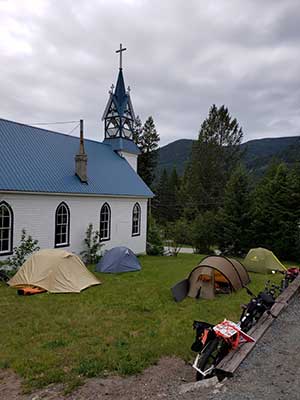 Parsons says she doesn’t fear the ghosts because she understands the spirits of these girls have “no place to go” after they’ve been bought and sold. These women stayed angry, “And very few prostitutes ever were successful.”

Parsons found that the former madam, Mary, had no assets and so she was determined to acquire the property. She said the legal wrangling to get clear title to three adjacent properties lasted from 1985 to 2003.

This is a compelling late-night ghost story for the six members of the ConnecTour group, who landed here after a day in the rain. We were tired and looking for a dry place to stay and Parsons offered the Catholic church, which is only occasionally used for services.

Some of our group chose to sleep outside in tents rather than risk the ire of these troubled spirits. Two brave souls slept inside.

There was a vaudevillian quality to the kindness Parsons offered our bedraggled group, but it was as authentic as the freshly baked chocolate chip cookies and hot tea she brought over to us. The price of admission this night was to be entertained as Parsons retold the local folklore, spiced up with her bits of folk wisdom.

She prides in being a tough old broad who takes guff from no one. But, to anyone who offends her, she warns, “I’m going to drop-kick you through the goal posts of life, from which you will never return.”

For us, Moyie is no longer just another pointless side trip off the highway. Instead, it’s a community steeped in history and in the spirits of those hardy pioneers.

A mansion fit for a queen

‘This is Mongolian rehab:’ Father and son go to extremes for digital detox