ConnecTour Chronicles: A brush with heat stroke and then hypothermia

This is part 4 in our series ConnecTour Chronicles

Doug Firby, publisher of Troy Media, is part of a group of Canadians who call themselves ConnecTour. Starting on May 28 in Kelowna, B.C. (B.C. travel restrictions derailed a planned start in Victoria), they hope to make an 8,000-km bicycle journey across the country, discovering how the COVID-19 pandemic has reshaped our lives and our sense of community. Watch for his reports on Troy Media. More information on the tour is available at ConnecTour.ca.

Folks who live in the interior of B.C. like to joke that this month is “Junuary.” One day it can be scorching hot and the next day you can be deathly cold.

Knowing you’re at the mercy of the weather can be a pretty abstract concept until you live it up close and personal in the valleys and mountains of this bipolar province.

In the past few days, we’ve experienced extremes of weather that seemed to show us no mercy at all.

The first was an arduous ride out of the desert-like Osoyoos district during a heat wave that drove midday temperatures to 36C. That day, we climbed about 870 metres in elevation over a distance of about 20 km.

For those who haven’t done this on a bicycle, those numbers probably won’t mean a lot. Let me help picture it – imagine doing a spin class at the gym, and the instructor is yelling at you to go harder and harder. Then imagine that instead of a five-minute burst followed by a cool-down, you do that extreme exertion for four, five or six hours.

This is part 4 in our series ConnecTour Chronicles

We left Osoyoos on our bikes – each loaded with full camping gear and enough food and water for the day – shortly after 7 a.m. Our plan was to ride the toughest part of the hill on Hwy 3 east in the coolest part of the day. 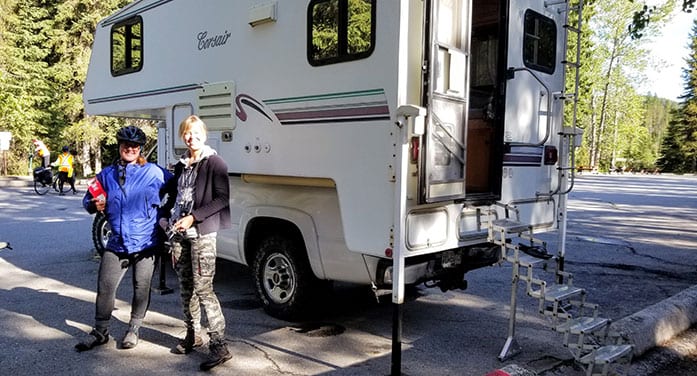 Our co-travelers Annie and Rick McFerrin

On a long, continuous ride, the secret to success is the “granny gear” – the lowest gear on your bike. It moves you ahead slowly but with the least amount of effort possible. Anyone who tries to climb faster than that is doomed to collapse in exhaustion long before the summit is in sight.

Our challenge was Mount Anarchist, which seemed like such an appropriate name for the looming monster ahead of us. Although we had only a few days to build strength and stamina, we were determined to slay the beast.

Lunch was by the side of the road around 2 p.m. We had made great progress but still had kilometres to go.

Eventually, we cracked the summit, only to discover after a few kilometres of relatively easy riding that we had another 100-metre climb. By then, fatigue and heat exhaustion were taking their tolls.

We ended up making camp in the Midway’s municipal Riverside Campground, where – as in almost every place we stopped – people who greeted us almost universally said, “You’re riding to where?”

St. John’s, N.L. Most days, I still can’t believe it myself.

Two days later, we faced an even bigger challenge under even more onerous weather conditions.

Leaving Grand Forks, we rode out of town with Rick’s friend Wayne, and then carried on to the resort town of Christina Lake, where we stopped for a coffee and snack at the friendly visitors’ centre.

All of us were trying not to talk about what awaited us – an 1,100-metre climb up over a summit and then down the road a few kilometres to Nancy Greene Provincial Park. 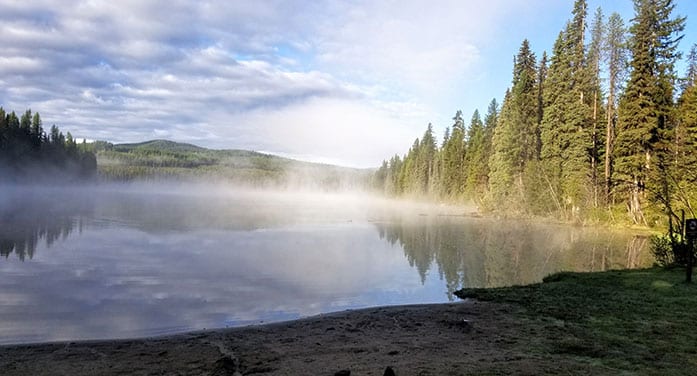 After a roadside break for lunch, we noticed the sky clouding over and felt a light sprinkle. We threw on our rain jackets, but all – in retrospect – were in denial about what we were about to encounter.

The light rain settled into a steady downpour and we quickly realized we were too late getting into our full rain gear. By then, we were chilled and still faced a couple of hours of steady climbing. Transport trucks, cars and four-by-fours roared by us, some so close we were showered in road spray and rocked by the wind gusts.

I thought to myself, “If only some of those drivers could see our world from the seat of a bicycle right now.”

By the time we reached the summit, we were all deeply chilled – almost unable to squeeze our brakes – on the descent to the campsite at Nancy Greene. Lisa and I were so cold, we took refuge in a rest stop washroom, the only place we could find that allowed us to warm our hands and add every last piece of clothing possible.

By the time we made the campsite, a couple in a Subaru pulled up to make sure Lisa and I weren’t in serious trouble. Just another in a growing number of strangers who regularly show kindness and generosity. Fortunately, at the campsite there was an old lodge where we sheltered until the chill died down.

Rick, ever the organized traveller, had set up the campsite and lit a fire. As the day’s rain gave way to a late afternoon sun, we set up for a cozy night. Lisa and I were so thankful for our resourceful co-travellers who were there to greet us and help us recover from a day that truly tested our stamina and resolve.