Canada’s debt is piling up again 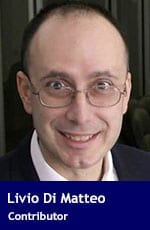 Canada was born in debt and continues to cycle back into deficit spending.

As a share of gross domestic product, the net-debt-to-GDP ratio will likely grow to over 50 per cent from the current low-30 per cent range.

These developments paint yet another chapter in Canada’s federal fiscal history – a history that saw the country born in debt at Confederation in 1867 as the federal government took on provincial debts.

The needs of nation building in the form of a transcontinental railroad soon led to deficits and they became a fiscal habit. Over the entire period since 1867, Canada has run federal deficits more than three-quarters of the time.

The longest deficit spending string was 1970 to 1996 – a period of 27 consecutive deficits with the largest coming in at almost $40 billon in the early 1990s.

Yet even that wasn’t the largest deficit ever. That occurred during the 2009 financial crisis and recession; it clocked in at nearly $56 billion.

However, as a share of the country’s GDP, the largest deficits were during the Second World War, peaking at nearly 23 per cent.

The current projected $250-billion deficit as a share of GDP comes in at about 12 per cent. While not Second World War scale, it beats both First World War and the Great Depression.

Of course, the sum of all deficits and surpluses becomes the federal debt. The net federal debt was $76 million in 1867 and rose to just over $11 billion by the end of the Second World War in 1945.

From there it continued to rise, reaching $20 billion by 1970. It then quintupled to reach $107 billion in the early 1980s and climbed to over $500 billion at the start of the federal fiscal crisis in the early 1990s. That crisis saw the federal government take budgetary measures that arrested the deficit cycle and generated the longest string of surpluses in federal fiscal history – the 11-year period leading up to the 2009 financial crisis.

Much like the deficit, the share of GDP is the more relevant statistic and net-debt-to-GDP ratios in Canada were highest during the Second World War, peaking at almost 110 per cent.

The low interest rates and rapid growth of the post-war boom brought the ratio to below 20 per cent by the early 1970s.

Where the federal government goes next is a function of its spending and revenues, which in turn are a function of choices and economic conditions.

If economic growth resumes in the second half of 2020, government spending begins to wind down and federal revenues start to recover, this year’s deficit will be a one-off event. If so, the subsequent debt surge should be manageable.

The federal government developed a strong fiscal position from dealing with its deficits in the 1990s and has one of the best net-debt-to-GDP ratios in the G7. Our ability to deal with the economic effects of COVID-19 is really a fiscal dividend from the actions and measures of that time.

However, real concern comes if the economic recovery is slow. Piling up large amounts of government debt at the same time as every other nation will eventually raise interest rates and debt service costs.

That will force harder budgetary choices in the years to come.

Livio Di Matteo is professor of Economics at Lakehead University. He is the author of A Federal Fiscal History: Canada, 1867-2017.

Canadian oil and gas sector has huge impact in U.S.

Ontarians pay too much for auto insurance